Here we will tell you what is throw ratio in a very simple and interesting way. You will see your favorite image and movie at your home clearly and effectively after knowing this term. Moreover, you might adjust the projector at a suitable distance to get the required result.

Indeed, the throw ratio is always stated in the specifications for a film projector. Furthermore, it plays a key role while deciding which projector should buy. Additionally, it also helps you determine the projector’s distance from the screen and your image size.

Being the outdoor theatre owner, you will also decide how far you should fix a projector from the screen. What are the extra benefits for you of knowing the throw ratio in this writing? Let us dive here to know more.

What is Throw Ratio?

Following are the main steps concerning the throw ratio. 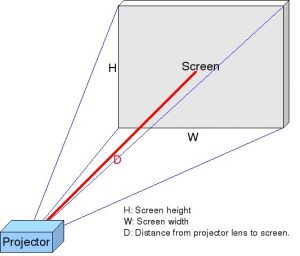 The throw is a film terminology that means the distance of a projector from the screen. In other words, it means how far away is the shadow of your film on the screen from the placing projector.

Throw distance is such a term that is always taken and described in a projector’s specifications. This term is similar to the throw, and it means the distance from the projector lens to the screen.

Using the throw ratio with all variations is very important and necessary while buying and selecting the suitable and right film projector for your new experience. Additionally, it has a key part to get the right position of the projector so that you may receive the suitable size of an image on the screen.

Furthermore, if you wish to place your image at a distance of 5feet from the screen, then your picture and image would be only 2.5 feet wide.

On the other hand, if your projector comes with a throw ratio of 1.5, you will need to fix the projector at a distance of 7.5 feet from the image screen. Consequently, you will be able to get a very clear image that would be 5 feet wide.

To find out your projector’s right position to get an excellent image, you can use the following simple equation.

Furthermore, to find out the width of an image, you can apply the given formula

Additionally, if you can only have the projector at a distance of 10 ft away from the screen and was in your room, you will receive the 5ft wide image.

To achieve the image with 5ft width, you are just required to place your projector nearly 6ft from the wall or screen. It makes a big difference in offices or small rooms. It also provides you more chance and flexibility on what place you can fix the projector.

Undoubtedly, you should know light travel in a space with the fastest speed. Of course, it does not always travel you would like about it. However, the light on the earth comes from different sources. As a result, the speed of light changes from source to source.

Furthermore, the light coming from electronics like battery-power devices as flashlights or projectors can reach far away but not too much far. This rule is also very important and ideal in outdoor cinemas and indoor projectors.

Therefore, you should keep a normal distance to get an impressive and clear image on the screen. You can face the following problems being too close or much too far from the projector.

When we use a projector to play movies at an outdoor cinema or drive-in theater, you wish to fix all set as soon as possible. Similarly, when we talk about the house cinema, we have a short room and very tight physical condition compared to commercial places.

Contrarily, it would help if you did not upset with throw distance. That is just an easy distance from the projector lens to the screen. After knowing completely about the throw ratio, you will get a suitable image to enjoy the movie or any other picture film.

Why Do You Require To Know Throw Ratio?

Throw ratio plays a very important role in calculating how far the device will place in your home, living room, bedroom, theater, or business conference room. Moreover, it has a key part to find out the unique quality of your image relating to the throw.

We find the throw ratio by dividing the screen’s width by the distance between projector and screen.

To know more details about the throw ratio, you can consult and read the manual. Certainly, you will find a lot of instructions about how we can calculate the perfect throw ratio. Additionally, your projector maker will give you information throw the specs list that contains a number with a colon and another number as 1.5:1 or 2:1.

In addition to that, every 2 feet of throw distance is 1 foot of the screen measurements. On the other hand, if you place your projector 12 feet away, your screen width is 6 feet.

To know more effectively about the throw ratio, we follow the given example. Normally the common throw ratio of any projector is 2.0. It means for every image foot width. Your projector is definitely at 2 feet far away from the screen. It also means the ratio is D/W or 2/1=2 or 2.0. If you keep a 5 feet image having a throw ratio of 2.0, it means the throw distance is nearly 10 feet.

To sum up, we have comprehensively thrown light on what is throw ratio and its benefits for excellent projection and clear image? Undoubtedly, the throw ratio is a very simple and useful formula that helps you find out the throw distance or image width. Moreover, after knowing the throw ratio, you will adjust the projector and screen perfectly.

Additionally, sometimes you get a different screen size that depends on what you want to see. In this case, your throw ratio formula is very useful that you can use to consistently change from distance to distance and screen size to screen size.

To know more about what is throw ratio, you can reach us through the comments section.

Allbeastreviews.com is a participant in the Amazon Services LLC Associates Program, an affiliate advertising program designed to provide a means for sites to earn advertising fees by advertising and linking to amazon.com