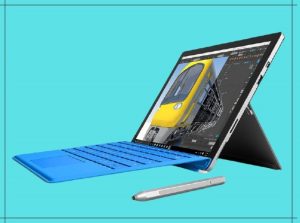 New upgraded models of pens come in the market, but all do not work with tablets. The best pens for surface pro 4 are those pens that slide well on its screen and pair up quickly.

For use with a Microsoft laptop, your pen must have a Mobile pen protocol. Here I have discussed the top 4 best pens for your tablet. They have MPP, long battery life, interchangeable nibs, and other specs are following in detail. 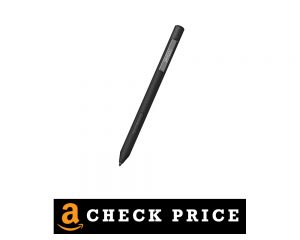 Wacom bamboo ink structure plus has an amazing body because of a triangular barrel that does let it slip or roll down the table; that’s why its nib lasts long.

If accidentally its nib got damage, then you can replace its nib. There are different nibs in its box, like blue nib, which will increase user writing experience. The covering of its barrel is made of rubber, which produces friction, and increases its grip, but rubber attracts dust, so clean it regularly.

The Wacom bamboo ink plus has its battery inserted in it, which can be charged by plugging wire in USB C port; moreover, it has long battery life.

It has a button at its top, which we have to press for a minute to let its Bluetooth on and pair it to your laptop for using it. Along with the Microsoft pen protocol, it also works with Wacom active ES protocol. It makes writing notes, drawing, designing, and sketching easy due to different kinds of nibs present in its box that are following firm, soft, and blue.

Bamboo ink plus have a natural tilt in it, which lets you hold it at the right angle, making it best for art on any screen.

Overall, it is the best pen for surface pro 4 because of its great nibs that can be replaced easily, triangular barrel, and rubber coating to prevent slipping. The battery is inbuilt that charges by USB C type port and has a natural tilt. 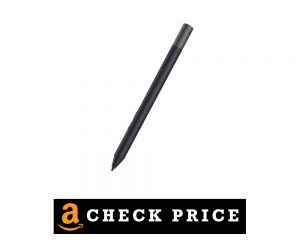 Dell’s premium active pen has a streamlined shape, which is very easy to hold. It feels like you are holding a pencil in your hand. However, make sure that you do not press the barrel button while using it.

Its nib is also replaceable. There is a tip remover that is present in its box catch the tip with the tip remover and pullsit. Then push the new nib with it into the active pen.

Dell’s premium active pen uses an AAAA battery life. Open the pen’s cover and place the battery in it such that the positive sign comes on the upper side and cover the battery with the pen cover. Its battery life is up to 12 months.

It has three programmable buttons; press the tap button for few seconds to enable the pairing mode and go to the setting of your surface pro 4 and on it Bluetooth for pairing.

Its pressure sensitivity is 4096, which helps in stroke thickness with exact precision, and this pen has an easy hold that let’s do an amazing drawing, sketching, and writing notes with high speed in notepad.

Tilt sensitivity is present, which helps adjust your tilt while shading, helps the artist draw, and has palm rejection, which does not let the screen off during drawing.

Overall it’s the best pen for surface pro 4 as it has MP protocol, tilt mode, long battery life, amazing streamline shape, three programmable buttons, and a pen-like nib that make it worth buying. 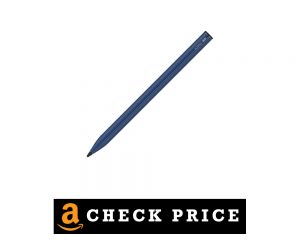 The adonit ink pen’s barrel is made of metal that why it is a bit heavy and feels like an upscale ballistic ballpoint, it is matte in color and has a round shape, just like carbon pencils.

Its tip like dell premium active pen, Wacom bamboo ink plus is also replaceable with the pressure sensitivity of 4096, which make it very easy to use it. Its nib may produce noise on some tablets’ screens.

It has an inbuilt battery with a tinny USB port for charging, and we can charge it completely in just one hour; and when it is completely charged, its red-light turns into green light. Its battery lasts up to 3 days.

It has two shortcut buttons for erasing, and we can right-click it easily. Further, it has palm rejection, which lets you draw by leaning your hand in your comfort zone. Pressing the lower button will turn the stylus pen off, and by pressing both buttons, you can switch on the stylus pen. It has Microsoft pen protocol and works best with Microsoft laptops and tablets. It is also compatible with HP, Asus, and dome dell models. Moreover, we can also use it as a monitor; hence it is2 in 1 device.

It can be used for drawing, sketching, and for making notes on a notepad because of its easy hold structure and pen-like feel as it is made of metal instead of plastic

Adonit ink pen lacks tilt shading that is present in the stylus mentioned above pens. Its price is very less, so it is counted as an affordable and best pen for surface pro 4.

Overall, it’s the best pen for surface pro 4 because of its button control, performance in drawing, graphing, and regular use. It also has palm rejection. It has all these amazing features at a reasonable price. 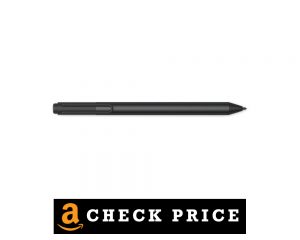 When Microsoft surface pro 4 was launched, Microsoft also launched a pen that was made on the same principle on which the surface tablet was made. It has a round barrel and a shape similar to a carbon pencil.

This pin has 4 interchangeable nibs in its boxing, having name H, B, HB, 2H. You can change the nib whenever you want to change the boldness and hardness. The new surface pen has an eraser at the other tip. We can erase texts that we have written with a surface pen.

A new surface pen AAAA battery that can be replaced when it expires by opening its cap. Further, it has 12 months of battery life anda USB C port for charging.

It has just one non-customize button that can be customized, then we call it the magic button when we press it once, then notes open, and by double click, it takes a screenshot.

The surface pen has  Microsoft pen protocol, but the Wacom AES is absent. We can also use it with surface pro 3, surface 3, and many Microsoft devices. We draw by using different kinds of brushes and colors from our tablet drawing pad, and we move our adonit ink pen on the screen of the Microsoft tablet, so there is no doubt in declaring it as the best pen for surface pro 4.

It has tilt support that lets you hold the pen at an angle of 45 degrees because the artist holds the pen at this angle for perfect drawing, sketching, and graphic designing.

Overall, it is the best pen for surface pro 4 because it is specifically built for this Microsoft laptop. It has all features like tilt support,  changeable nibs, one button for controlling the pen, and a changeable battery. 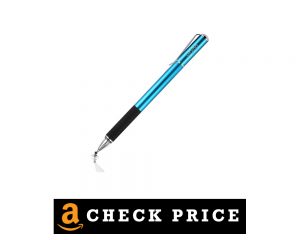 Mixoo 2–in-1 is just like a ballpoint from outside, and it has a holder as pens have. A rubber band on the stylus’s upper body improves the user’s hand grip, so it does not slip easily.

It has a transparent disk made of silicon, which increases its precision because we can see through its disk where we are pointing its tip. Further, it has a fiber tip and silicon tip that can be changed easily according to needs.

Fiber tip is used when you are casually using your tablet, and you don’t need any precision.

Like other pens, mixoo 2- in- 1 does not have any inbuilt button, but a holder is preset by using which we can attach it to our shirt pocket or with other accessories.

It is compatible with iPhone, iPad, tablet, android laptops, tablets, and Samsung phones. In short, it works with all the devices that have a capacitive touch screen.

As it works on capacitive screens, it does not have pressure sensitivity, and if you are used to pressuring sensitivity, you may not enjoy it. But it does have a good writing experience on PC, mobiles, surface laptops, and tablets. Overall, it is the best pen for surface pro 4 as it is 2 in 1 has a transparent disc that improves precision. Futher, both fiber and rubber tips make it more versatile and have 3 replaceable extra tips.

Is Surface Pro Pen Worth It?

Yes, it is best to use the notebook to draw and sketch, and you have to select an icon, or for swiping the screen, then it is better to buy a cheap stylus pen or use your finger.

Where Is The LED Light On My Surface Pen?

For connecting the pen to the surface pro, we connect it by Bluetooth. Hence press the top button for a few seconds, and the light on the flat side of the pen will blink. Hence in this way, you locate the LED position.

The top 5 best pens for surface pro are discussed above for your ease, so now you have a complete vision of each product. I will recommend you to buy Wacom bamboo ink, plus if you are always in haste and are messy.

Because it remains at its place, does not slip, has a natural tilt, three buttons, an integrated battery, 4 interchangeable nibs that help in digital art. However, it is expensive so if you can’t afford it, go for an Adonit ink pen.

Because this pen has a very less price, easy to hold, has two programmable buttons, it also has an inbuilt battery charged by a USB C port, but it does not have tilt, so you will have to compromise on it.

Allbeastreviews.com is a participant in the Amazon Services LLC Associates Program, an affiliate advertising program designed to provide a means for sites to earn advertising fees by advertising and linking to amazon.com